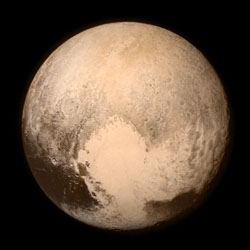 Our July release celebrates two significant events taking place this month. On July 14th 2015 the inaugural Netlabel Day will take place, and to mark the occasion we are releasing new mixes of one of our oldest and most well known tracks. The same day will see the New Horizons spacecraft reach its closest approach to the dwarf planet Pluto, giving us an opportunity not to be missed to revisit the 1997 Prism track Voyage To Pluto. Both remixes are courtesy of Psychadelik Pedestrian, bringing the original trancecore tempo down to a more respectable pace. The Netlabel Day mix combines dubstep bass growls with crisp, contemporary beats and a melodic, dreamy and uplifting synthesizer lead while retaining the recognisable electronic piano arpeggios. The New Horizons remix slows things down further and introduces bleepy, space age sounds and delay alongside a huge reverberating supersaw lead synth line. Of course, we couldn't miss the opportunity to include a remastered version of the original trancecore mix from 1997 and the popular Dreamworld UK hardcore remix originally released in 2005 which narrowly missed out on a place in our top 20 download chart of all time earlier this year.

Voyage To Pluto 2015 by Prism is licensed under a Creative Commons Attribution-NonCommercial 4.0 International License.
Permissions beyond the scope of this license are available on our licensing page.We can licence these tracks for commercial use, including monetized YouTube videos. Please fill in our music licensing form for details.