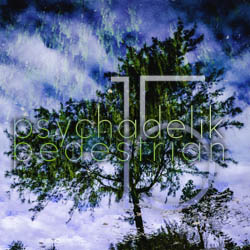 Psychadelik Pedestrian returns with this 10 track album, following up his Nocturnia and Transient LPs. Deliberately taking a step back from the intense sound of Nocturnia, this time Psychadelik Pedestrian adopts a more relaxing, chilled vibe, reminiscent of tracks such as Coral Reef and Night Beach. Despite this, the album kicks off in a suitably moody style with the brooding, orchestral strings of Into The Ether, gradually building into a spacious, piano driven piece with subtle dubstep influences - a bridge between the darker moments of Nocturnia and the lighter shades present on the remainder of this album. This is followed by Catching Rays, a pure, chilled hypnotic groove, harking back to early Psychadelik Pedestrian tracks with uplifting piano and pads. The pace quickens slightly for Pulse, an electro breaks track first featured on our Netlabel Day 2015 EP with plenty of synth sounds and a catchy, bleepy hook. The uplifting vibes return for Starlight, a melodic workout with deep bass rhythms and rippling arpeggios before the tempo slows further for Fledgling, a soothing downtempo track which combines a haunting piano and strings melody with some electronic bleeps and analogue beats. The mood darkens for The Dead Of Night, a slightly sinister track blending strings, piano and sub-bass with contemporary beats and featuring an uplifting breakdown in the middle. Returning to more upbeat sound, Nevada attempts to capture the essence of the American state, combining spacious reverberating drums to reflect the wide open space of the desert landscape with futuristic synth riffs referencing the mysterious Area 51. Bring the album back down to earth with a bump, Hit The Deck starts off with soothing pads, but soon becomes one of the few uptempo tracks on the album - a slamming breakbeat workout taking Psychadelik Pedestrian right back to his roots, while featuring crisp modern beats. Breaking Waves takes us straight back to chillout territory, with the focus on warm, uplifting yet relaxing pads. Bringing the album to a crescendo, Sleep Tight begins slowly with haunting keys before launching into an electronic workout with contemporary synth riffs and even pitched gabba kicks to wind up the album.

Fifteen by Psychadelik Pedestrian is licensed under a Creative Commons Attribution-NonCommercial 3.0 Unported License which allows you to re-use these tracks in your own videos, DJ mixes and podcasts providing you are not making a profit. If you would like to use these tracks for a commercial project, you can purchase a licence for commercial use from Jamendo

Psychadelik Pedestrian's second album features a blend of brand new tracks and some of his best tracks since his self-titled first album. The album features 10 dubstep, electronica, chillout and breaks tracks, including some featuring full vocals from guest vocalists at CCMixter.