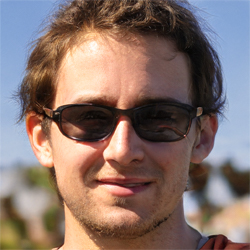 Dave Kent is a sound engineer who first collaborated with Toucan artists as long ago as 1997, helping to produce a couple of tracks. Dave didn't try writing any music himself until 1999, producing Freak Show, a sample based big beat track in the style of Fatboy Slim. The track proved more popular than Dave thought it would, so he embarked on another crazy breakbeat outing in 2000 with Monkeys Ate My Fish Tank, joining forces with Psychadelik Pedestrian.

Dave's name became more well known after his remix talents were discovered by Toucan. Between 2000 and 2004, Dave produced fast and funky house remixes of Redmann's So Sublime and Zero Gravity, and Psychadelik Pedestrian's Against The Grain among others.

Dave has also collaborated with other Toucan artists on several Phish Funk tracks and as Online Funkstream. In 2007, Dave wrote his first solo track for several years with Stimulation, a funky house track which featured on the re-release of his track Pump It, and later in the year collaborated on his most unusual project to date with Prism producing two UK hardcore tracks in a funky style which Dave reckons are "funky house, just at 170bpm"!

Dave works as an engineer in a recording studio in Bedfordshire, and has helped produce all kinds of music, from classical music and church choirs, to Latin American funk and metal. Dave enjoys working an music of all styles, but claims he is at his best when someone a bit different comes into the studio: "I like working with bands who have a style all of their own", he says, "but they've got to be funky!". Dave still drops in at Toucan from time to time, though his remixes and productions now take a back seat to his studio engineering career and family life.